Porting existing software to new operating systems is not always an easy task. Yet, the general procedure of porting different software packages is often surprisingly similar. In this blog post, we walk through the process of porting the multi-system emulator Mednafen to the Managarm operating system. Managarm is a pragmatic microkernel-based OS with fully asynchronous I/O (see our GitHub repository for more information). While we discuss the specific example of Mednafen, this post can be seen as a general recipe for porting software to Managarm. 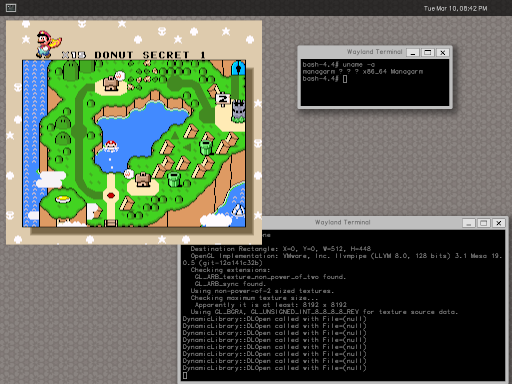 Overview. Porting a package commonly consists of the following steps:

The first step when adding any package is locating the source code. This is usually not too hard. In the case of Mednafen, there is no public Git repository; hence, we will build from a source tarball. We decide to use the latest version at the time of writing, namely 1.24.1. Now, the next step is to figure out how to compile the package. Mednafen uses the (dated) GNU Autotools build system. Compiling it amounts to:

autogen.sh is a script to regenerate configure (via autoreconf); this step is not necessary for most modern build systems such as CMake or Meson. As usual, configure resolves dependencies and sets up the package’s build directory while make and make install compile and install the package, respectively.

--prefix and DESTDIR. When cross compiling, we need to ensure that packages are installed to the correct directories. Since we want to install the package system-wide on the target OS, we set the configure option --prefix=/usr. However, care needs to be taken during make install: without any further parameters, make install would install the package to the /usr directory on our host machine. Luckily, the build system allows to override this behavior via the DESTDIR environment variable. Intuitively, DESTDIR replaces the root directory / when performing make install: when DESTDIR is set, all files are installed to ${DESTDIR}/usr instead of /usr (assuming a --prefix of /usr). Hence, DESTDIR allows us to correctly install the package into the system root of our target OS.

Since Managarm uses xbstrap to orchestrate the build process of all packages, adding a new package requires adding an entry in xbstrap’s bootstrap.yml file. The easiest way to add a new entry is simply copying some already existing entry that is close enough to what we need. Of course, it is necessary to modify parts of it, like the source URL or package dependencies. It is also necessary to customize the regeneration step (that invokes autogen.sh), the configure step, and the build step. The resulting YAML fragment looks as follows:

After adding the new package, the remaining steps are compiling and testing it, and fixing any problems that arise. Compiling packages for the first time consists of running the configure step (i.e ./configure) to generate the build files, and running the build step to actually compile the sources. We invoke these build steps through xbstrap using the xbstrap install --rebuild mednafen command.

For Mednafen, the initial configure run fails with the following message:

Upon closer inspection of the config.log file, it becomes clear that the configure script checks for the presence of sem_init and reports an error when this function is not found (below, non-relevant lines are omitted):

This compilation failure is caused by the fact that mlibc (the C library that Managarm uses) misses the corresponding function declarations. For Mednafen to work, this issue needs to be fixed.

Fixing sem_*. Adding sem_* functions to the C library requires (i) adding the headers and declarations, (ii) adding function definitions and (iii) actually implementing those functions. At this stage, we are primarily interested in making configure happy; hence, it is enough to add only stubs to mlibc (and not full implementations of sem_*). Looking at the POSIX standard, the required declarations look roughly like this:

Note the __mlibc prefix for internal implementation details that are not specified by POSIX. After adding these declarations to mlibc (i.e., to a new semaphore.h header), together with appropriate stubs, the configure step succeeds and the actual build can start.¹

¹ The new function declarations are in options/posix/include/semaphore.h with stubs in options/posix/generic/semaphore-stubs.cpp. After adding them, the C library needs to be reinstalled using xbstrap install --rebuild mlibc{,-headers}.

Compilation issues are fixed in similarly to configuration issues. The initial compilation hits a missing typedef in mlibc, followed by a more severe gap:

Missing iconv. At this point, the build fails due to missing iconv_* declarations. These are part of the C library (or, alternatively, can be obtained from GNU’s libiconv library). Thus, they can be fixed in the same way as the sem_* issues mentioned above, by adding new declarations and stubs to mlibc.²

After compilation, several issues remain that prevent Mednafen from working correctly. Often, programs need some minor corrections, for example in C library functions. In the case of Mednafen, however, some more work is required. We quickly discuss missing features that have been implemented to finally make Mednafen work correctly.

pthreads. While mlibc already has stubs for all of the pthread_* functions, thread creation via pthread_create was not implemented yet. This is required since Mednafen uses a second thread for audio handling. Implementing pthread_create consists of two parts:

To this end, a new request (sys_clone) to create a new thread is added to the POSIX server. In mlibc, the pthread_create function is modified to invoke the newly added sys_clone request. Before calling into the POSIX server, mlibc prepares the stack of the new thread and sets up the so-called thread control block (TCB) which stores all thread-local variables. Afterwards, control is handed over to the user provided function.

(While we are still missing an implementation for pthread_join and possibly other thread related functions, this is enough to run the emulator. It does become a problem when ones tries to close Mednafen and results in a crash.)

mkdir() on ext2. Even though Managarm already supports the ext2 file system, support for directory creation was still lacking. Adding this support involves the POSIX server (to send a request to the file system driver) and the file system code. Extending the latter turns out to be straightforward since all necessary ingredients (i.e., allocating a new inode and adding . and .. directory entries to it) were already in place.

³ The implementation can be found in options/posix/generic/semaphore-stubs.cpp`.

In this blog post, we walked through the process of porting the multi-platform emulator Madnafen to Managarm. Most steps of this process are prototypical for other ports: in addition to the port’s integration into the build system, changes to the C library are usually required when porting new software to Managarm. Additionally, Mednafen required some additions to drivers and POSIX code. Luckily, for many other ports, this last step is not needed. 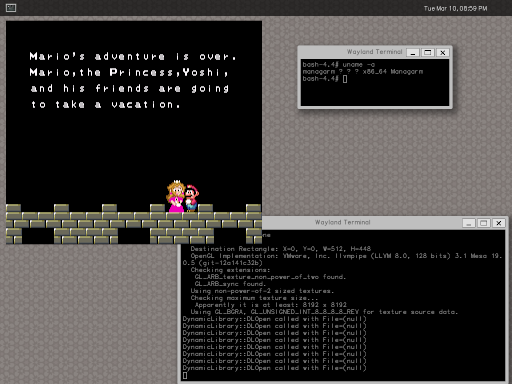