In this post, we will give an update on the progress that The Managarm Project made since our last update in August of 2022. For readers who are unfamilar with Managarm: it is a microkernel-based OS that supports asynchronicity throughout the entire system while also providing compatibility with lots of Linux software. Feel free to try out Managarm (e.g., in a virtual machine). Our README contains a download link for a nightly image and instruction for trying out the system.

Major updates since our last post include support for memfd, support for PRIME, work into getting mlibc working with Linux and the addition of Qt6 and GTK+ 3.

New features in the kernel, POSIX and other servers

PRed and written by @no92

Some of my work this year revolved around drm, our implementation of Linux’s Direct Rendering Manager. This implementation works by supplying a common interface for drivers to plug into (via C++ classes, for example) and for userspace (via DRM ioctls or libdrm), which is linked into our graphics drivers as a shared library. Currently, support is limited to modesetting-related operations; our driver list is comprised of bochs, plainfb, virtio, vmware (and intel, which is old and doesn’t currently use DRM).

However, some programs do make use of some features that are commonly available on Linux, but were not implemented in managarm yet. In particular, usage of the DRM_IOCTL_PRIME_FD_TO_HANDLE and DRM_IOCTL_PRIME_HANDLE_TO_FD ioctls was missing, but is a requirement for sway and an optional feature in mesa and weston.

This feature is necessary, as DRM handles for objects are only valid for the open()ed /dev/dri/cardX and thus cannot be shared across processes. To facilitate this, the above ioctls exist - they convert DRM handles to fds, which can then be passed across UNIX sockets - and can then be converted back to a DRM handle in a different process, to use it with DRM. For an example on how this can be used (albeit involving EGL), see this blog post.

As of now, no specific support within the graphics drivers was necessary. However, all the drivers either use VESA or (U)EFI (plainfb) or virtualized hardware (bochs, virtio, vmware), so on real hardware some driver support might become necessary to allow for this buffer sharing API to work with accelerated graphics.

In the end, this PR allowed for weston to be updated to version 10, and might come handy in the future if sway were to get ported, for example. Since the PR got merged, mesa also enables support for dmabuf - which in the end also relies on these ioctls.

PRed and written by @no92

memfd_create is a function on Linux (and some other OSes), that creates an anonymous memory-backed file and returns a file descriptor. This allows for using the default libc file manipulation functions with a memfd object, including passing it through UNIX sockets.

This year, we implemented this functionality in managarm and immediately noticed programs making use of it, including weston/wayland. Porting this functionality also allowed us to continue our ongoing quest of porting software to managarm.

PRed and written by @Dennisbonke

After the success of GTK+ 2, we wanted to try tackle Qt5. Qt5 turned out to be a mess for cross-compilation, but with enough effort a hacky port was produced that was also working. It was, however, in no state to upstream. This was largely because of qmake, the build system in use by Qt5.

When Qt6 came around, they switched to CMake, which is a lot nicer for cross-compilation, and without much effort, a basic Qt6 port came along. While commandline applications are nice and all, what we really wanted was a fun game based on Qt6, so the choice was made to port LibreMines, a minesweeper based on Qt6. This was done successfully as shown below. 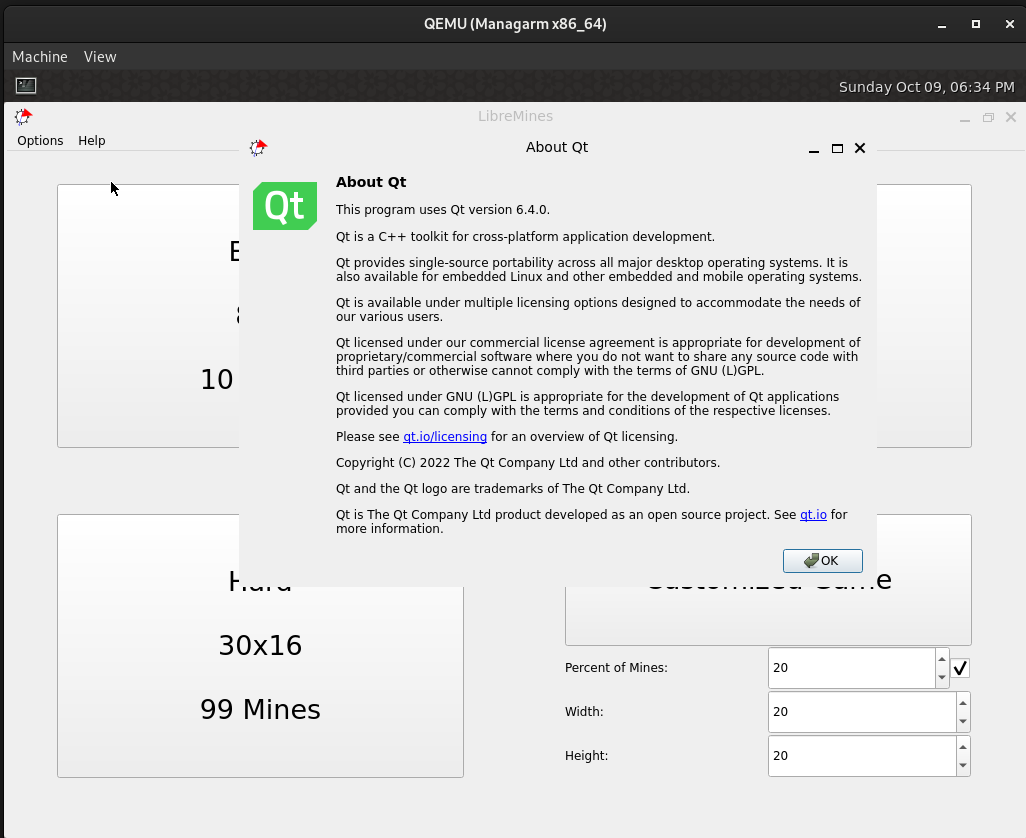 PRed and written by @Dennisbonke

As mentioned in the August 2022 update, we had GTK+ 2 working already. However, one major browser that was attempted required GTK+ 3, namely WebKitGTK. So, off we went on a challenge to get the required dependencies in. The big hassles proved to be GTK+ 3 itself, mainly due to runtime files missing, like GDK cache files, IM loader cache files, and the MIME database, which was fixed by adding post-install scripts and letting xbps configure all packages during boot, and DBus, which we still do not have fully working. The solution to DBus was quite simple, after we found out that DBus is only used for accessibility. We patched out the initialization calls for accessibility and after some locking fixes in mlibc we were able to run the gtk3-demo program successfully. 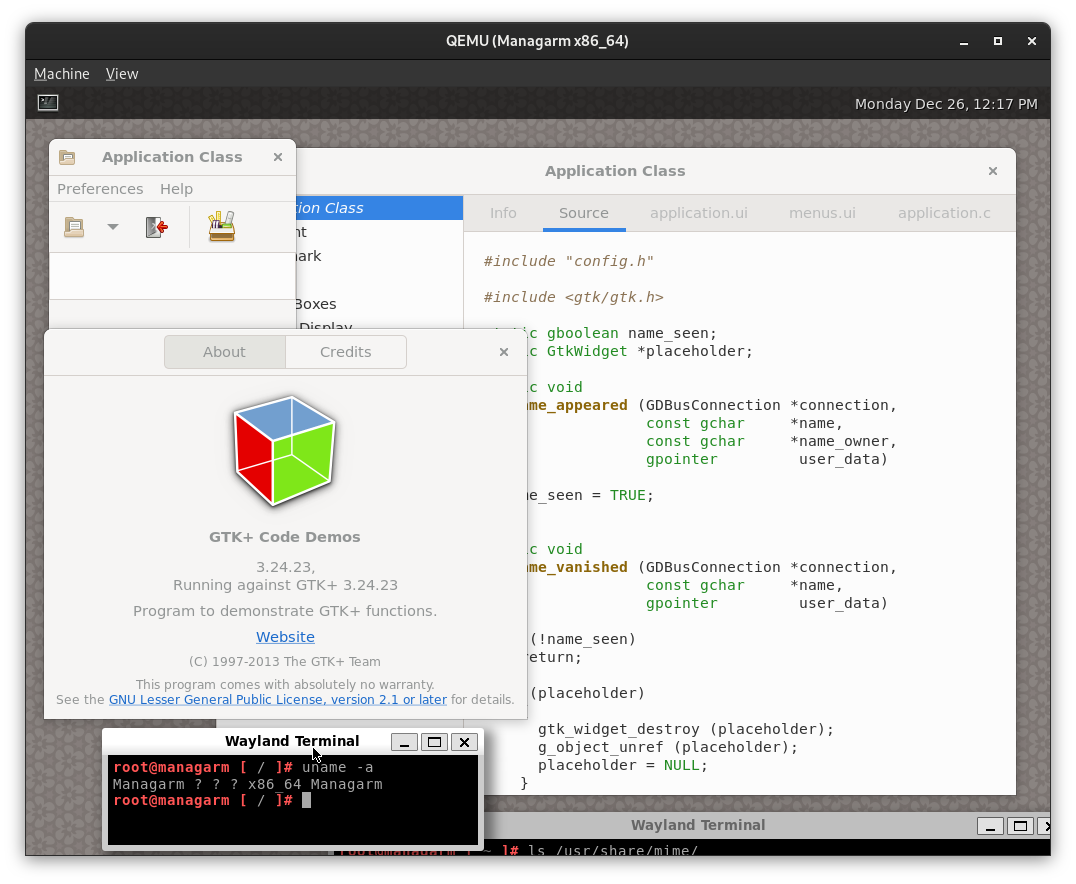 While working towards running a proper browser on Managarm, we struggled to determine whether mlibc was at fault, or whether the Managarm kernel or its servers were wrong. To eliminate the first possibility and granting easy access to lots of nice debug tools, we started the mlibc LFS project, named after Linux From Scratch. It is essentially Linux From Scratch, but uses mlibc instead of glibc.

We quickly got a small userspace running in a chroot, but it eventually grew out to something that we can boot up in a VM, a neccesity when testing out graphical programs. The major things that came from this still ongoing project are the fixes and additions to the mlibc Linux ABI, general usability under Linux, and an easier way to debug applications in the future. While we did get to a point where we could run WebKitGTK reasonably, this has since regressed on a nasty deadlock in pthreads, which we’re working on fixing.

What do we want to achieve in the next year?

Finish porting xbps. Unfortunately, despite improvements to the network stack, we did not finish porting xbps this year. We aim to have xbps in a state where an end user can just update the package repository and install packages by the end of next year, on supported network hardware.

Port a web browser and work towards self hosting. While we made great improvements in this area, including the addition of the links browser mentioned in the August update, we aim to have one of the common browsers (Chrome, Firefox, WebKitGTK) running by the end of 2023. We also would like to get more common development programs in, like git. While we also had this goal at the end of 2019, it turned out that the given timeframe was too ambitious. However, due to the progress achieved in the past three years, like porting the X stack and GTK 3, and the addition of someone to the team who likes to work on porting software, we feel that we can achieve this goal in 2023.

Add more drivers. Specifically graphics and networking related. Together with a few LAI and USB related quirks, a lack of drivers is the biggest issue for running on real hardware. Recently, work has been put into writing more network drivers, and some contributors are looking into adding modesetting drivers for Intel iGPUs. This is certainly an area where we would benefit from additional contributions, even just further testing on real hardware.

We are always looking for new contributors. If you want to get involved in the project, you can search our GitHub issues for interesting tasks. Aside from contributions to the kernel and/or POSIX layer, we would be particularly interested in drivers for additional file systems (other than ext2), since Managarm currently lacks good drivers in these areas, and better debugging tools, like ptrace and related APIs. As always, just testing on real hardware to find quirks or test drivers is also an excellent way to help us!

If you want to get in touch with the team, you can find us on Discord or on irc.libera.chat in the #managarm channel. Also, if you want to support Managarm, please consider donating to the project!